Winter Wonderland in the Methow Valley

Within an hour of our arrival at Winthrop’s Sun Mountain Lodge, I had clicked into my Nordic skate skis and Ron had cinched down his snowshoes. Our luggage, stashed in our room with a majestic view of the Methow’s Virginia Ridge, lay mostly unpacked. After a five-hour drive from western Washington to the other side of the North Cascade Mountain Range, neither we—nor a fast-disappearing January day—could wait. Winter was calling. Spend any time on the coastal side of Washington state, and you find out quickly that escapes to the eastern “dry side” are key to mental health during gray, soggy western Washington winters. Our coastal home of Bellingham has its own wonders, but reliable snow—the kind that stays—is not one of them.

Not so in the Methow (pronounced “Met-how”) Valley, the winter wonderland that draws vacationers and recreationists to north central Washington and a high-desert climate famous for dry snow and bluebird days—more than 200 of them per year. Ron and I had driven through a pelting downpour the first two hours of our drive that included Stevens Pass, closed the day before due to snow and downed trees. While it delayed our trip by a day, we were lucky the pass reopened early the next morning, capping a westside week of high wind and flood warnings, fog and power outages that can sap anyone’s winter spirit.

This winter wonderland draws vacationers and recreationists to north central Washington and a high-desert climate famous for dry snow and bluebird days."

We were happily headed to a region occupying a meteorological sweet spot in a high valley of the North Cascades. The valley, with three close-knit communities of Mazama, Winthrop and Twisp, gets colder temperatures and more snow than even higher places because of the way weather systems move through. The valley’s highest point (Rendezvous Pass) tops out at about only 4,000 feet, good both for winter-long snow and deep breaths – breathing’s much easier here than high-altitude winter playgrounds like Colorado or Utah. This year, winter had come late to the Methow, but with a couple of early January storms, the valley was back in the game. We arrived after two o’clock and hurried to beat the sunset, taking the first trail out the lodge’s door – View Ridge, a 1.3-kilometer (less than a mile) out-and-back that allows both snowshoers and skiers. Its steady rise led to a big-sky viewpoint of foothills and wilderness stretching far as you could see, and a quiet solitude that seemed worlds away from what we left on the state’s western side. 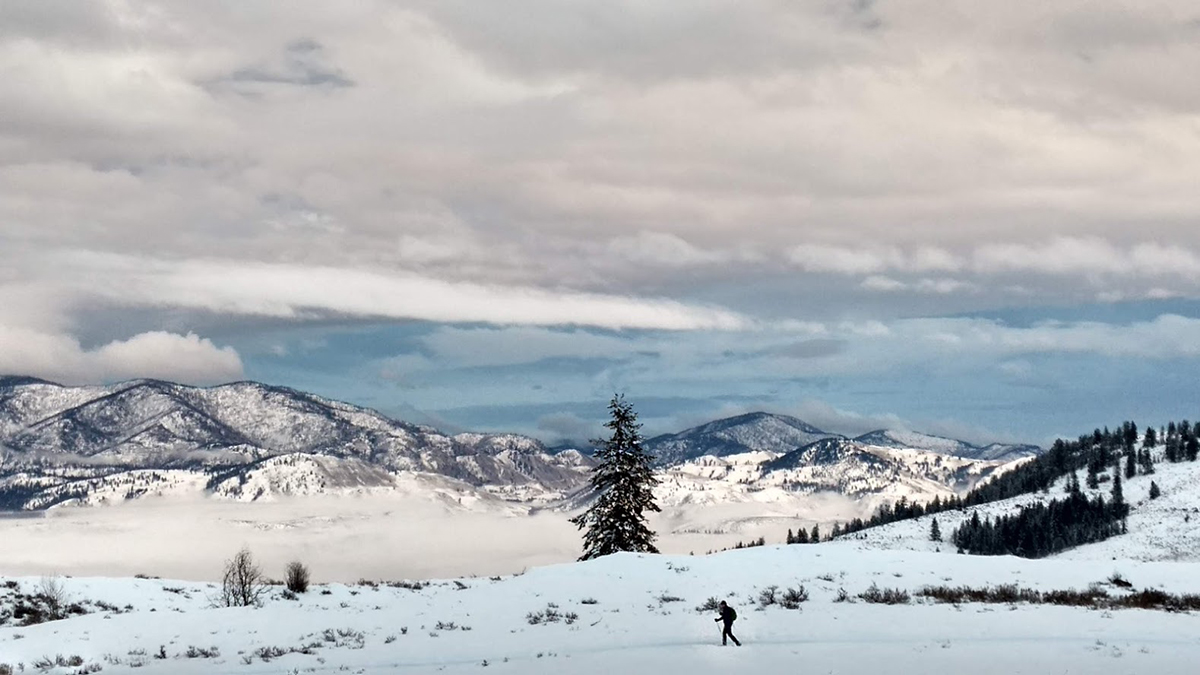 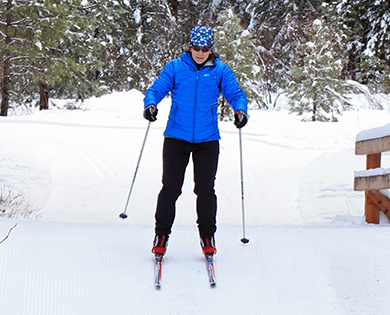 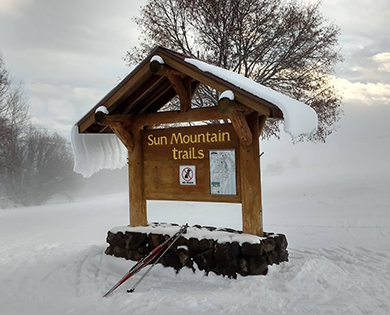 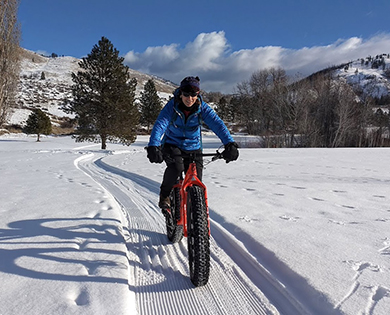 View Ridge is part of the impressive Methow Trails network, with more than 120 miles of groomed trails—both skate and classic—hailed as North America’s biggest cross-country ski area. It’s not just for skis, either. The system includes nearly 30 kilometers (18 miles) of dog-friendly trails and almost as many miles of scenic, maintained snowshoe trails. Managed by the nonprofit Methow Trails organization, the 43-year-old trail network is the heart of Methow Valley’s recreation scene, and responsible for connecting residents and drawing visitors year-round instead of just summers, when the valley was known mostly for deer hunting and warm weather hiking, fishing and swimming. “This place used to just close down six months a year,” says former trails executive director and businessman Jay Lucas, who has been skiing and living in the valley since 1980.

The system’s three main hubs, at Sun Mountain, Winthrop and Mazama, mean you can pick and choose. “Because it is such a big system, there’s such a huge variety of places to go and trails to ski,” says Don Portman, valley pioneer and founder of the Sun Mountain ski program. There’s something for all ages and skill levels: winding and rolling hills; flat open stretches; steady climbs and descents, trees and big sky. Kids 17 and under and seniors age 75 and over can use the trails for free. The trail system has become a national model for public and civic cooperation.

About half of the trail network is on U.S. Forest Service land; the remainder is on private land and Fish & Wildlife (USFWS), WA State Department of Natural Resources (DNR), and WA State Department of Fish & Wildlife (WDFW) lands. Since the network started more than four decades ago, some 175 private landowners have granted permission to use their property. “It’s backyards, people who own a half-acre to hundreds of acres,” says James DeSalvo, Methow Trails executive director. “They’re a part of this thing. It’s what makes it so special and what ties everyone together. Without these landowners, this thing wouldn’t exist.”

Sun Mountain Lodge has activities to keep the whole family entertained every season of the year, winter, spring, summer and fall.

The trails are largely responsible for making the Methow Valley a year-round tourist attraction, and Methow Trails brings in an estimated $12.4 million to the local economy, writes DeSalvo. Sun Mountain Lodge, which celebrated its 50th anniversary in 2019, is an award-winning, modern gem, atop a bluff 1,000 feet above Winthrop with panoramic views of the Cascades Range and valley beneath. A total 112 rooms are available, including lakeside cottages and guest buildings adjacent to the main, three-story lodge.

The Methow Valley’s first Nordic ski resort, the nationally known lodge not only provides luxury accommodations (its dining room is a rare AAA Four Diamond Award winner and the lodge has won numerous national awards) but is a great home base for winter activities. Take ski lessons or clinics, barrel down the resort’s sledding hill, or go dashing through the snow in a horse-drawn sleigh to an enclosed, fireplace-heated miner’s tent for hot cocoa or a dinner. We rented top-notch skis, boots and poles for Ron at the activities shop down the hall from the front desk. A few steps outside puts you at the Methow Trails trailhead. (Note to skiers and snowshoers: On your return, keep energy in reserve for the final uphill push to the lodge.)

Outdoor hot tubs can soothe tired muscles at day’s end, or you can visit the lodge’s luxury spa for some personal attention. On the main level, a cozy reading room and big game room—pool, foosball, table tennis, anyone?—help keep you entertained during winter’s long nights. Guest rooms have no televisions, underscoring the resort’s emphasis on unplugging and getting out. 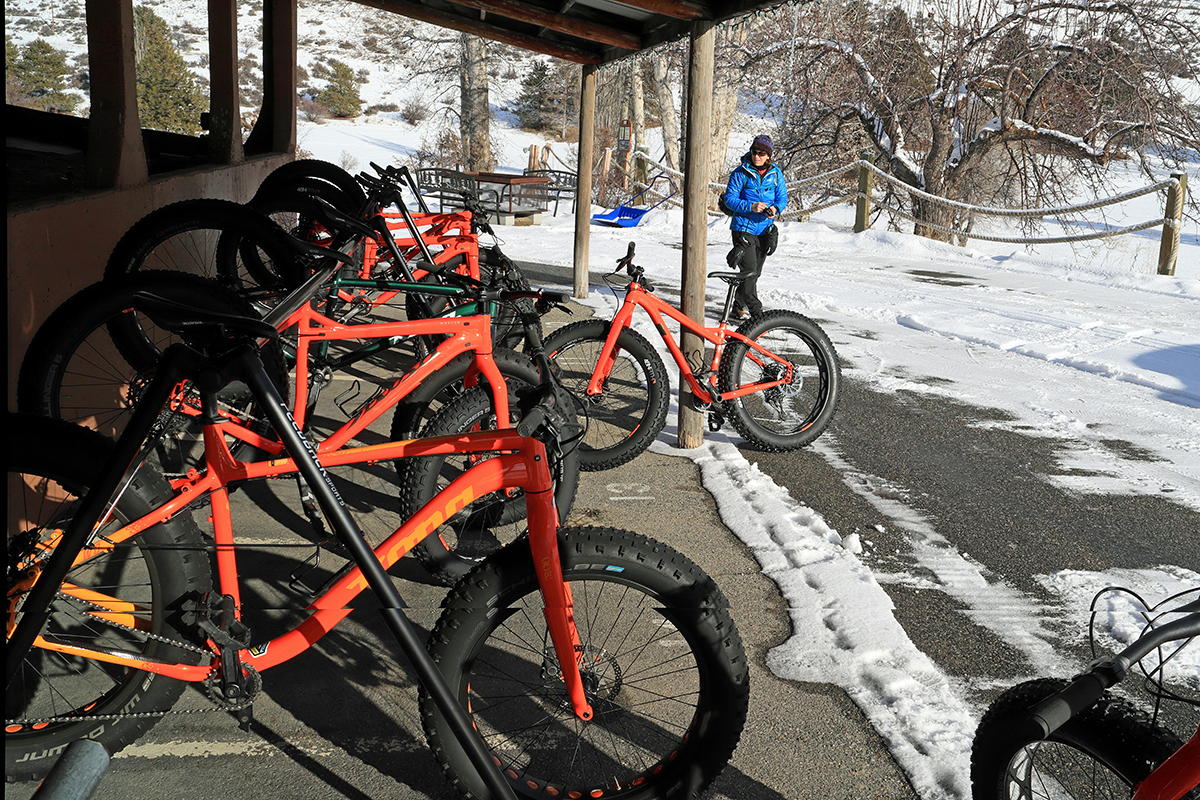 On our final day, we left Sun Mountain and traded skis for two wheels. We drove outside Winthrop to try fat tire biking on the groomed trails of Bear Creek Golf Course, (where lunch and snacks are available) in its second year of fat bike operation. Its five miles of trails are part of the 50 or so now available in an expanding fat biking network managed by Bear Creek, Methow Trails, the Methow Fatbike organization, and state recreational groups. The valley’s varied terrain, along with usually reliable snow and grooming expertise, makes it one of the go-to places in the nation to take a winter spin. Fat biking can be a fun cross-training workout when you want to give your ski legs a break. We stuck to the golf course, where renters can choose from a fleet of bright orange bikes. Helmets are recommended. We dressed for a Nordic outing – pedaling warms you quickly – and snow mocs for footwear. On a blue-sky day, we cruised a ribbon of white on freshly groomed trails for about an hour, oversized tires making for a surprisingly soft, smooth ride and a growling crunch on the snow. Next time, I promised myself, we’ll pack a lunch and plan a longer ride. On Methow trails, it feels like you can go forever.

Wolf Creek Bar and Grill, Sun Mountain Lodge, Winthrop. An accompaniment to the lodge’s celebrated dining room, The Bar goes way beyond bar food. Chef Tyler Krost, who oversees both, makes locally sourced food his priority, from the Snake River Farms/Double R Ranch beef right down to the delicious Reuben sandwich’s sauerkraut from nearby Carlton. His from-scratch kitchen turns out fare that is creative and fun. “I just try to keep things fresh,” Krost says. Try the chips-and-goat-cheese fondue to start – the vegetable chips are the best we’ve ever had and dipped into the creamy-warm cheese makes for a savory appetizer. Sustainably raised steelhead is grilled to a flavorful tenderness, the entrée enhanced by roasted Brussels sprouts and bacon crisps that added a satisfying crunch. The day’s special, lamb stew, was a hearty finish to a day spent playing in snow.

Sixknot Taphouse, Winthrop. An impressive array of taps includes 13 cider, eight Sixknot’s own cider brand. Try the four-cider flight for sampling. The corn chowder special is aptly named, and sandwiches like chicken salad and classic grilled cheese are worthy cider pairings. For the non-cider drinkers, there are craft beer, wine and kombucha options.

Old Schoolhouse Brewery, Winthrop. Known for hearty hamburgers and fish and chips. A slab of bread pudding with a mug of Blue Star Coffee are good partners for dessert.

Glover Street Market, Twisp. It’s a market, but also has a breakfast and lunch counter popular with locals. House made mushroom and savory squash soups made for a perfect winter lunch when we visited, or get there earlier for creative breakfast offerings.

Cinnamon Twisp Bakery. Famous for its namesake Cinnamon Twisp, an oversized braided pinwheel of cinnamon roll goodness. Sandwiches are available too and be sure to get some cookies to go.

Loup Loup Ski Bowl. Visit for alpine skiing, be sure to check for snow conditions. Loup Loup has its own Nordic trails, and a cool sledding “luge” run.

Winthrop Rink, in the middle of town, is an outdoor ice skating and hockey rink with lights for night skating, skate rentals and afternoon discounts.

For shopping, check out Twisp, a small and growing community with a big heart for its artists. Stop in at The Thrifty Fox, an eco-conscious thrift store. Winthrop’s main drag is good for shopping, window or otherwise, with its Old West theme, including raised wooden sidewalks that help with the snow.

Feb. 8 – Ski to the Sun Marathon and Relay, Mazama (start)