Like nowhere else on Earth, the dramatic landscape of eastern Washington is founded in colossal floods. Initially these were hot, searing basaltic flows of lava that spread out for hundreds of miles across the region 15 to 17 million years ago.  Basalt flows were followed millions of years later by frigid, massive glacial outbursts. Together, these geologic events produced the many unique, colossal landforms of the Channeled Scabland we see today - like cataract canyons, coulees, and giant streamlined Palouse hills.

Unparalleled in the whole wide world, scarcely even approached by any landscape of similar origin, are the Channeled Scablands on the Columbia Plateau of eastern Washington.”

Spectacular landforms created by Ice Age floods are not only the result of the megafloods, but also the highly jointed nature of the basaltic lava flows.  Shrinkage cracks, that developed as the lava cooled, essentially pre-cut the lava into blocks that powerful Ice Age floods easily plucked and hauled away. This resulted in huge potholes and deep chasms visible today.  Truly unusual, this type of erosion has only been observed in one other place – the planet Mars, where huge floods of water attacked the Martian surface billions of years ago.

Only from space can we view the entire breadth of the Ice Age megafloods! 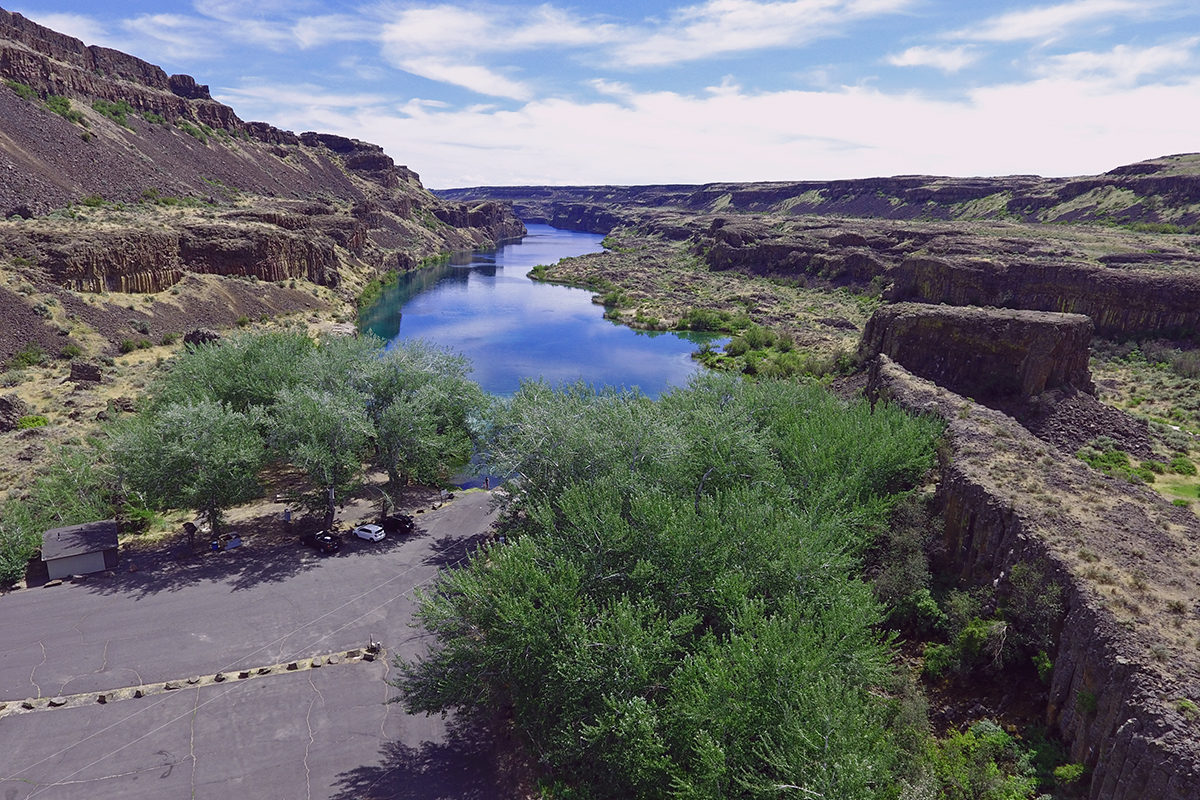 This side canyon of the Lower Grand Coulee shows one of the mostly highly dissected areas carved out by Ice Age floods. This includes giant potholes hundreds of feet deep and wide. These Deep Lake Potholes are featured on this 3 minute video.

Torrential megafloods, mostly from glacial Lake Missoula, raged through eastern Washington, stripping away a thick mantle of topsoil before carving a complex network of interconnected channels across the Channeled Scabland. Within these blistered-arid lands, today’s visitors can gaze upon the oversized flood features created by not just one, but dozens of cataclysmal deluges.

These include box-shaped canyons called “coulees” carved deep into the basalt bedrock, without a river or stream nearby. Fifty-mile-long Grand Coulee and Moses Coulee are the longest. And of the many dozens of beautiful lakes in eastern Washington, most are result of deep scouring into basalt bedrock along scabland coulees. Tear-drop-shaped remnants of Palouse hills were eroded by floodwaters hundreds of feet deep moving at freeway speeds. And where the floods slowed temporarily lie giant gravel bars covered with current ripples—just like those on a normal streambed, only hundreds of times bigger.

After spreading out for almost 100 miles across the Channeled Scabland, all the floodwaters converged onto a single narrow opening at Wallula Gap. Twice as much floodwater entered this constriction than could pass through at once, forcing the excess to back up behind the gap. Temporary Lake Lewis flooded the Tri-Cities under as much as 90 stories of turbid floodwater. 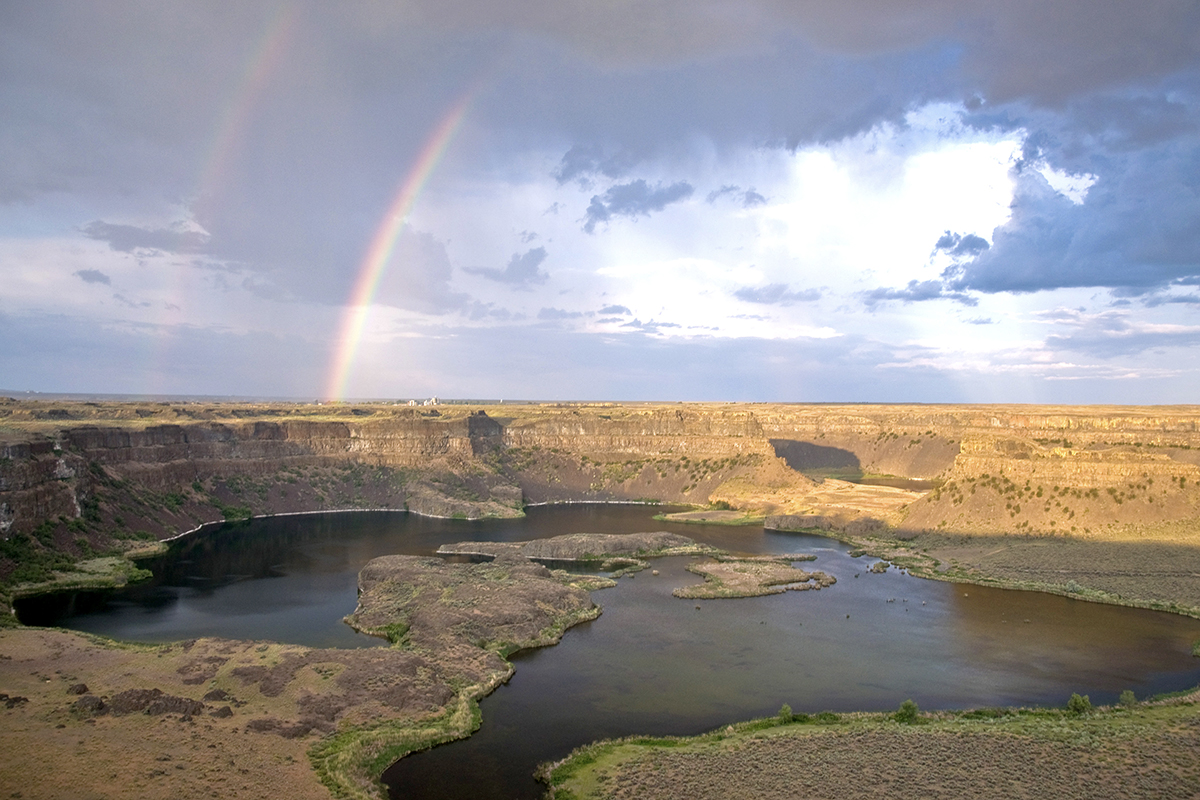 Up to 400 feet of water flowed over Dry Falls during the recurring ice age floods.

Icebergs, from the breakup of the distant ice dam, floated within the relatively calm lake waters. During the largest megafloods the lake lasted only a few weeks before draining out through the Columbia River Gorge to the Pacific Ocean. Today, the former extent of Lake Lewis is known from the thousands of exotic boulders, called erratics, left behind after the grounded icebergs melted and floodwaters receded.

But, after each flood, glacial ice continued to creep forward like a giant conveyer belt, eventually re-plugging the same mountain valley in northern Idaho, creating a new Lake Missoula. At a critical height, the lake destabilized the ice dam causing another outburst flood only a few dozen years later.  Based on slackwater deposits from the Missoula floods, called “rhythmites,” we know that several dozen separate huge flood events occurred between 14,000 to 20,000 years ago. Other evidence indicates the earliest Ice Age floods go back one million years or more.

A frequent question is “did any humans witness the Ice Age floods?” Perhaps—at least one Indian legend hints of a huge flood in eastern Washington. But conclusive, direct evidence has yet to link humans with the floods. Presently, the oldest dated human remains in eastern Washington go back around ~13,000 years, whereas the last Ice Age floods occurred ~14,000 years ago.

The revolutionary theory of Ice Age megafloods, first proposed by J Harlen Bretz in the early 1900s, was rejected for decades by most geologists before gaining acceptance through aerial surveys that began in the 1950s. Before Bretz proposed his “outrageous hypothesis,” geologic changes were believed to only occur very slowly over long periods of time. But after decades of careful and meticulous field study, Bretz was able to successfully present a convincing case for “catastrophism.”

In 1979 Bretz was awarded the Penrose Medal—the highest honor bestowed by the Geological Society of America. Vindicated by his peers, Bretz died two years later at age 99, perhaps only regretting he had outlived all his critics. Come follow in Bretz’s footsteps to discover for yourself the raw beauty of eastern Washington’s unique and wild flooded landscapes—much as they appeared to Bretz when he unraveled this amazing tale almost 100 years ago.