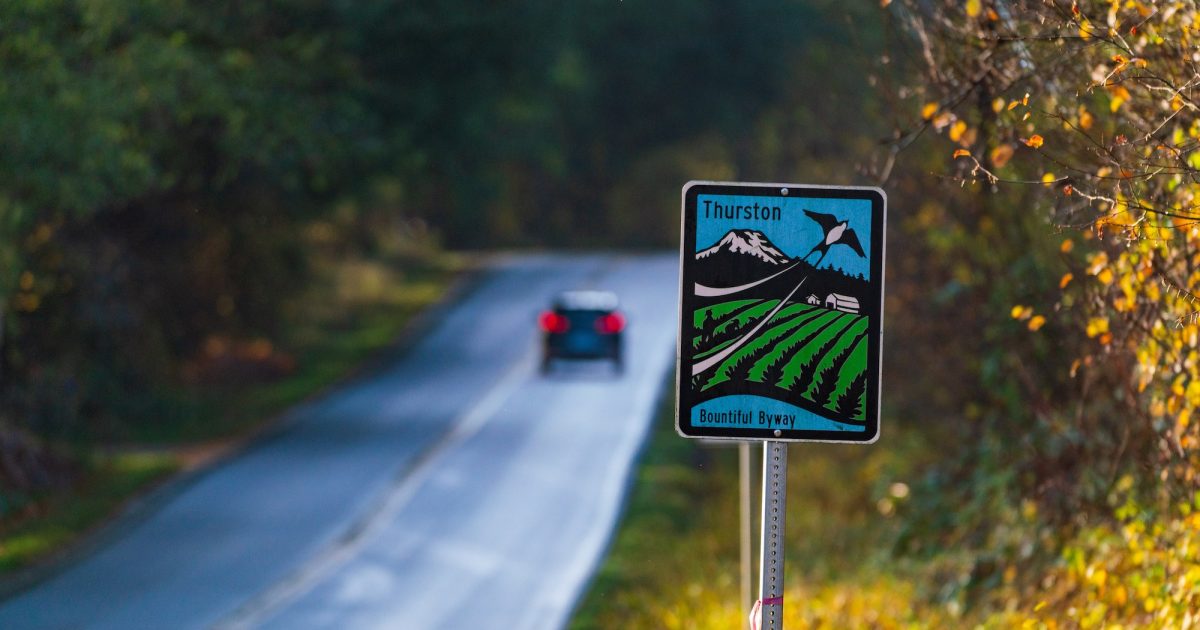 In the shadow of Mount Rainier, an agricultural corridor stretches between the Nisqually Valley and the Capitol State Forest near Olympia. Small towns dot the map, connected by country roads and trails. This is the Thurston Bountiful Byway — a 60-mile loop encompassing farms, markets, craft producers, and outdoor recreation.

I set out on a rural road trip to explore the lower half of the loop, from Yelm to Tenino, hoping to discover some tasty local sips and eats. My byway journey began at the Prairie Hotel in Yelm. Located close to town and within walking distance of eateries and entertainment, the Prairie Hotel provided a convenient byway basecamp. Clean, quiet, spacious, pet-friendly and smoke free, it offered everything I look for in a comfortable stay.

Nicknamed "the pride of the prairie", Yelm is a vibrant little community with a growing arts scene and ideal location to access nearby Mt. Rainier National Park. There are lots of great options if you’re looking to have a night on the town. The sleek, modern Yelm Cinemas (featuring recliner seating) and the Uptown Lounge are a short walk away, and guests of the Prairie Hotel receive a discount for dining in the lounge. You’ll also find the 507 Taproom and Filling Station next door — a beer and cider taphouse with dozens of rotating taps. 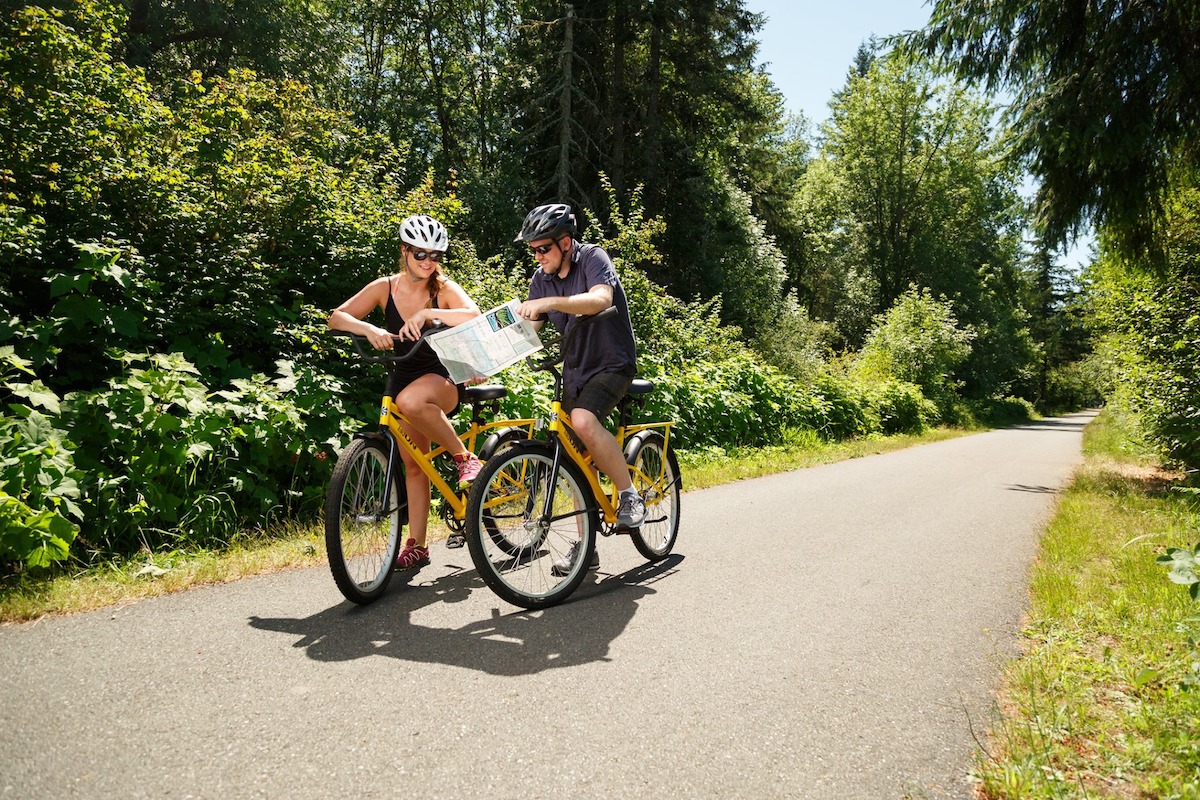 The paved Yelm-Rainier-Tenino Trail is great for walking, biking or running.

After a cozy night's rest, I headed out to explore. First stop: the Yelm Farmers Market. Held Saturdays between May and October, the market features over 20 vendors — from farms, artisans and bakers to beekeepers and leather workers. I parked at Yelm City Park and walked over to the indoor/outdoor market, held at the Yelm Community Center. After perusing the colorful bouquets and handmade goods, my walk continued across the street on the Yelm-Rainier-Tenino Trail.

A paved, 14.5-mile trail connecting its namesake towns, the Yelm-Rainier-Tenino Trail once operated as a railroad route between 1869 and the late 1980s. Today, the path parallels State Route 507 and makes for a great alternative to driving. If you have a bike, bring it! I walked a short section of the trail, quickly leaving the town of Yelm behind and entering a stretch of Douglas fir trees. Whether walking, biking, or driving, it’s only about 5 miles to the next Bountiful Byway town: Rainier. 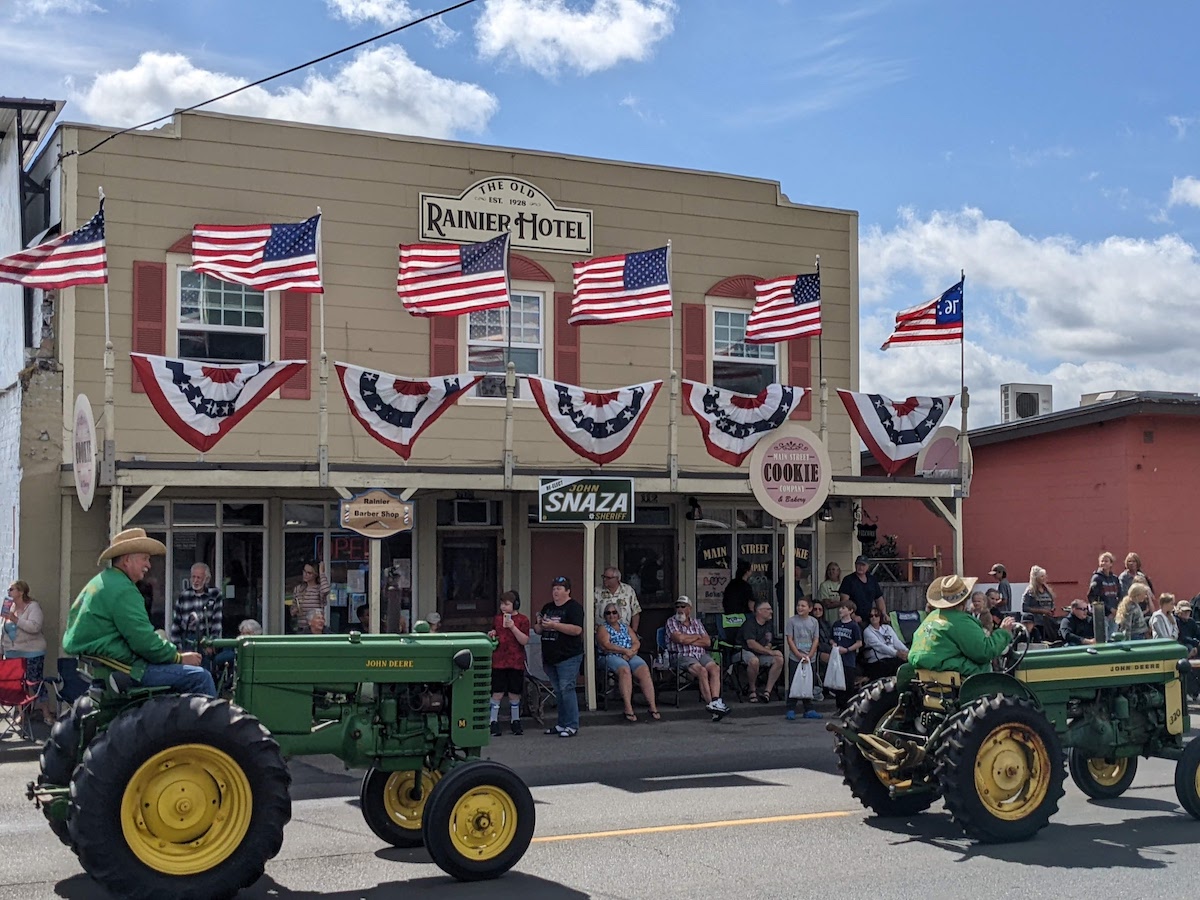 Named after the mountain, of course, Rainier is a tiny town steeped in Americana. I happened to be in town during Rainier Roundup Days, an annual festival held during the 4th weekend in August. The town was abuzz with locals listening to live bluegrass tunes, perusing vendor pop-ups, and prepping for the main event: a good old-fashioned parade. Attendees lined the main street, cheering as everything from classic cars to tractors paraded by.

Ready for lunch, I took the scenic route northwest out of Rainier. Rural roads led me to the quiet lakeside retreat at Offut Lake Resort. A family-friendly campground and year-round fishing destination, the resort offers human-powered and electric boat rentals, fishing tackle, snacks and more at the general store. While I wasn’t there to fish, I had worked up an appetite. The onsite restaurant, Lady of the Lake Public House, offers everything from seafood baskets and po’ boy sandwiches to Kobe burgers and “steak at the lake”. The Lady of the Lake serves surf-and-turf alongside a full bar menu, I enjoyed a lakeside lunch of Lemon Twisted Prawn Caesar Salad, paired with a Lacey Lager from Thurston County’s Top Rung Brewing. 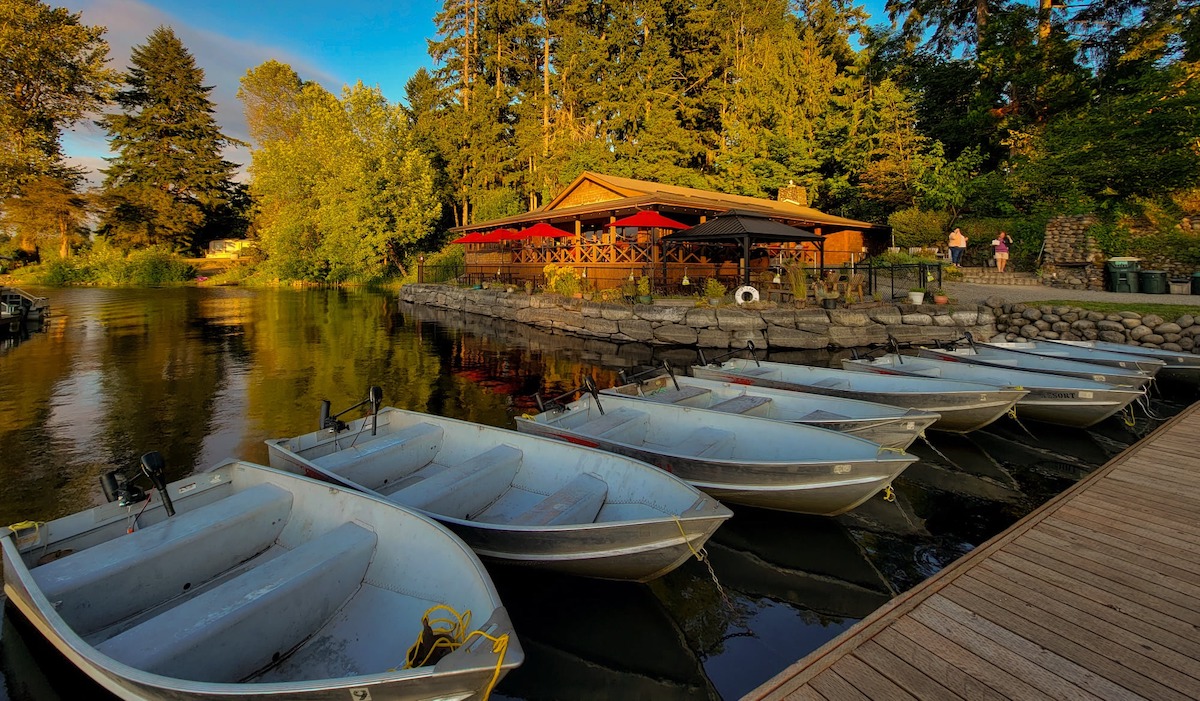 Originally built in 1939, the Lady of the Lake reopened in 2014 following extensive renovations. Inside, a warm boathouse feeling welcomes you. I chose to sit outside on the wraparound deck, but any seat in the house affords waterfront views. Watch folks fishing while you dine, sip a craft cocktail, and peruse Lady’s extensive whiskey list. Or simply make dinner reservations and stay for a stunning sunset over Offut Lake. 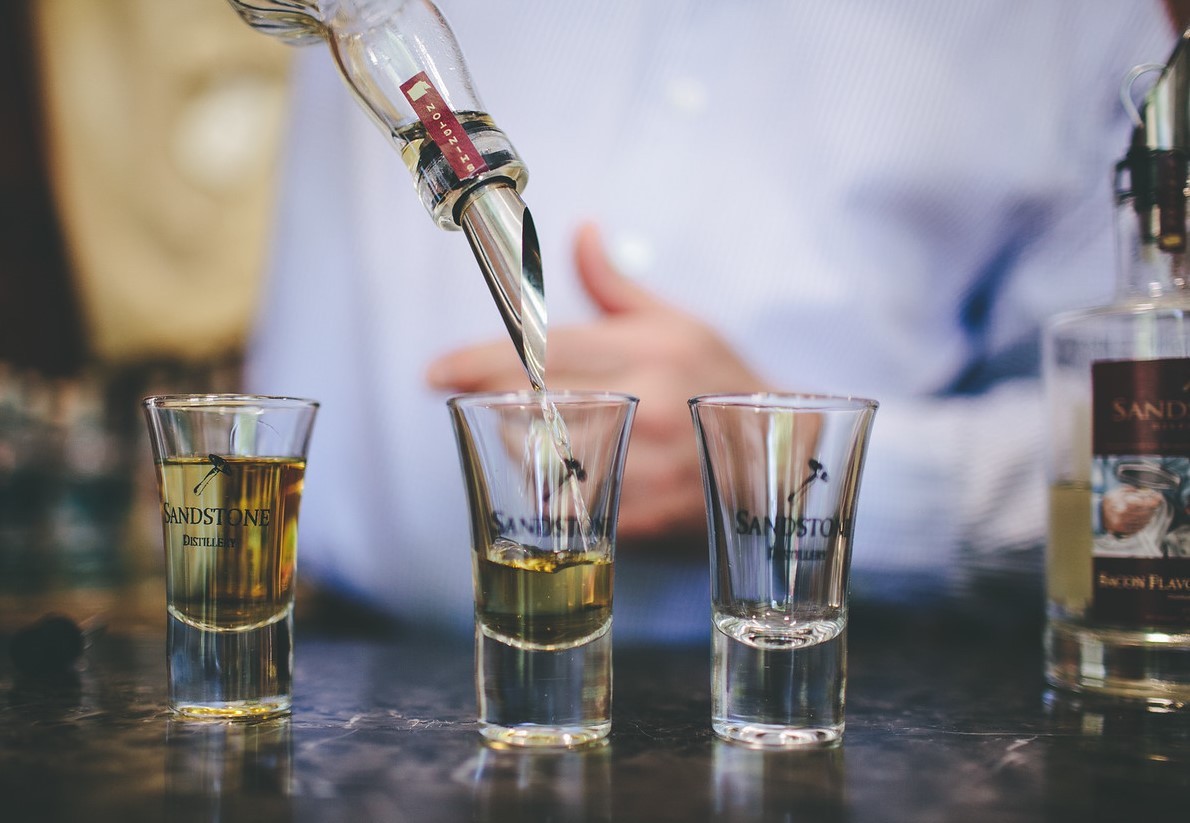 With a full belly, I hit the road to Tenino in search of spirits. A craft distillery producing vodka, gin, whiskey and more, Sandstone Distillery recently opened a second location in downtown Tenino. The tasting room is housed in a historic 1914 building — home to a theater, soda shop, hardware store, and newsroom over the years. Today, the exposed brick-and-hardwood space is refurbished and reimagined as a spirits tasting room.

I ordered a clear spirits flight, consisting of vodka, gin, and four ready-to-pour cocktail tasters. As I tasted my way through the lineup, I asked about some of the more unique offerings. Sandstone makes a bacon whiskey, infused with real Hempler’s bacon (try it in a Bloody Mary). Their coffee liqueur is made with Olympia-roasted Dancing Goats coffee beans. Everything is crafted with Washington-grown grains and ingredients for a true farm-to-glass experience. Visit the downtown Tenino location for a tasting, or stop by the original Sandstone Distillery on Wright Road for a tour and tasting. 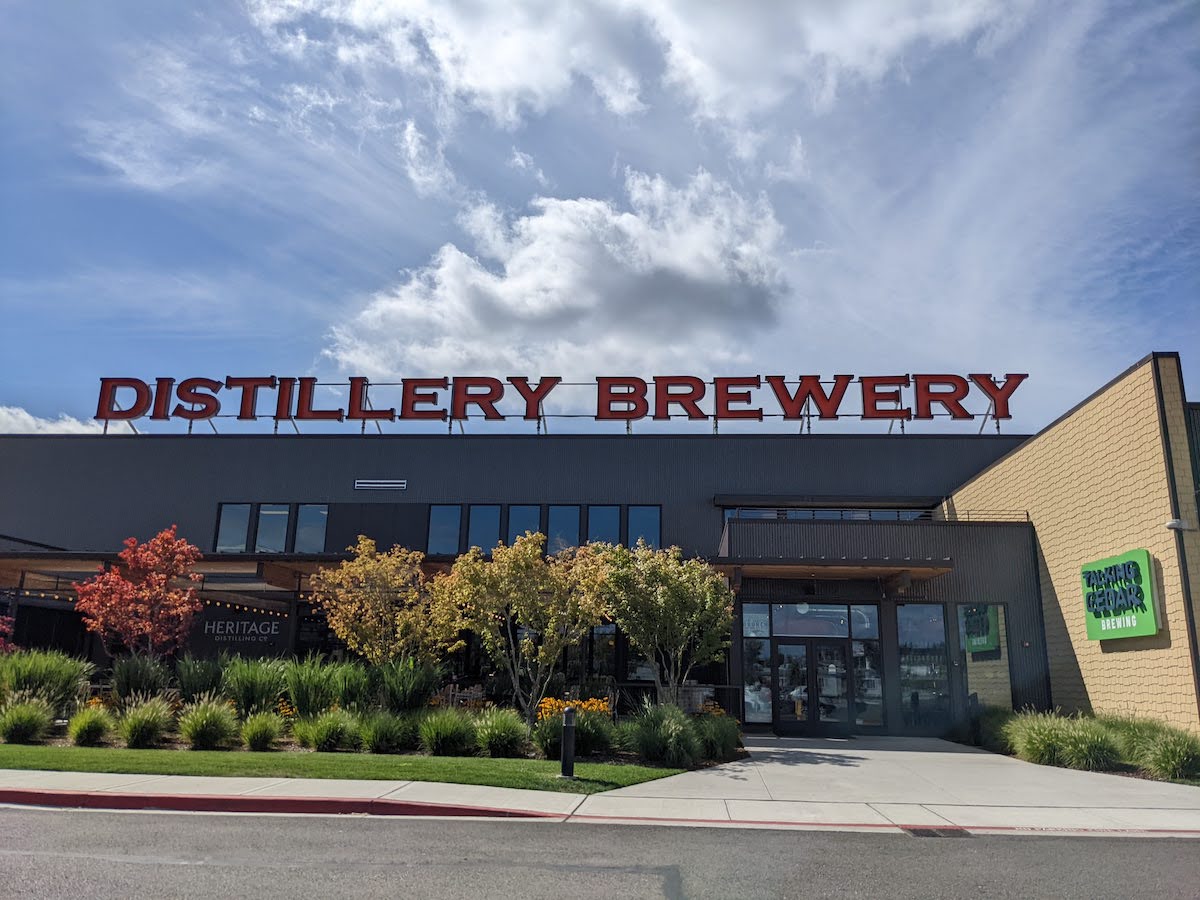 From Tenino, I continued my road trip 9 miles west into Grand Mound. There, a new restaurant, brewery, and distillery is making history. The first tribally owned distillery in the U.S. (and the first distillery allowed in Indian country since 1834), Talking Cedar is owned by the Chehalis Tribe. The tribe teamed up with Heritage Distilling Co. in 2018, successfully lobbying Congress to repeal the ban on distilleries in Indian country. The massive distillery/brewery building is impressive from the outside, and the inside is another world. Two distinct bars — one on the brewery side, one on the distillery side — overlook the production areas. I was led to the brewery side for a taste of my bartender’s recommended brew, Talking Cedar Juicy IPA. This citrus-forward Juicy IPA was among the best I’ve had in recent memory. I’ll be back to try the rest of Talking Cedar’s beer lineup soon.

My route focused on craft beverages and outdoor experiences, but there is so much more to see along this byway - from farms and gardens to history and culture. This trip can be completed in a day, but you’ll want a weekend to experience all 60 miles of the scenic route. Plan your own trip to the Thurston Bountiful Byway here. 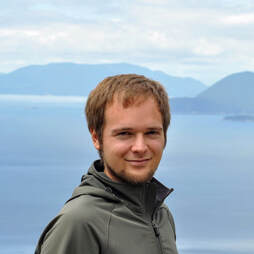 Brandon Fralic
Brandon Fralic is a freelance travel writer, editor, and guidebook author based in Bellingham, Washington. He is the co-author of two hiking books: Beer Hiking Pacific Northwest and Urban Hikes Washington. Brandon's work focuses on a few of his favorite things - travel, the great outdoors and craft beer.

Winter Fun in Northeast Washington
Holiday Fun in the Christmas Tree Capital of the World!
Celebrate the Holiday Season in Anacortes
The Hive of the Methow: The Buzz About Twisp
The Return of OysterFest on Hood Canal!
Explore Camas and Washougal
Discover the Peak of the Northwest
Westport's Fresh Catch: Salmon
Fall Roadtrip Along the White Pass Scenic Byway