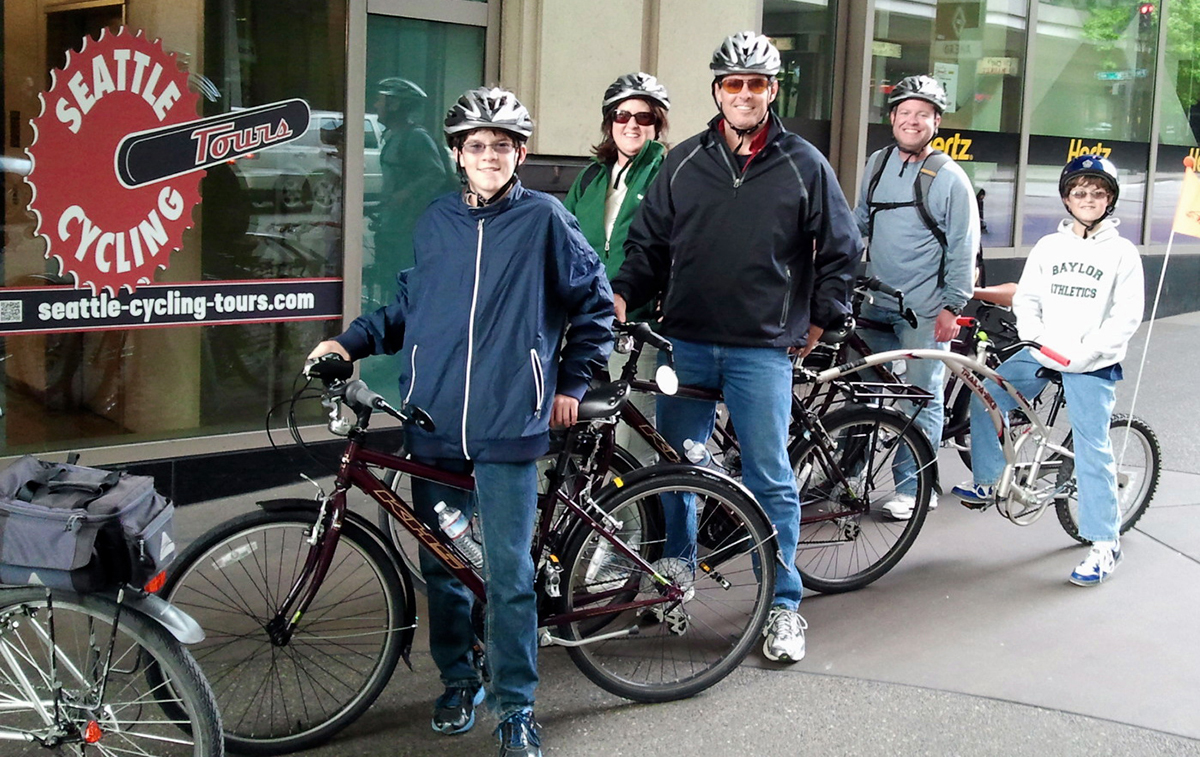 Seattle Cycling Tours takes visitors on rides through many of Seattle's historic and colorful neighborhoods.

A casual exploration of downtown Seattle

In 1851, when the 22 members of the Denny Party arrived at Elliott Bay on the shores of the future city of Seattle, they set in motion a series of booms and busts that continue today. And while current changes may seem overwhelming, a Seattle city tour from the seat of a bicycle or on foot is the perfect way to keep it all in perspective.

“One of the aspects of Seattle history that makes it nice is that it’s relatively short. Post-settlement, the story is only 170 years old,” says writer David B. Williams. Because the city has preserved landmarks, “We can still see and feel our early history,” Williams adds.

One of the aspects of Seattle history that makes it nice is that it’s relatively short. Post-settlement, the story is only 170 years old." David B. Williams

As Craig Scheak with Seattle Cycling Tours. sees it, there’s no better way to click with Seattle’s past than a bike tour. “You have more of a chance to connect with other people and to see stuff you can’t from your car,” says Scheak, who has lived in Seattle for nearly 60 years and has been commuting to the city by bicycle for nearly half of that time.

The long-time resident’s carefully plotted routes along a network of bike paths avoid the city’s notoriously steep hills and construction tied to Seattle’s latest boom.  In a little under three hours, his basic Seattle tour covers history of popular neighborhoods in the downtown core, including the Waterfront, Seattle Center, Pioneer Square and the International District/Chinatown. Scheak also offers tours of Ballard, Georgetown and Bainbridge Island.

As guests on his small group tours pedal comfortable city commuter bikes, Scheak shares tales of Seattle’s past, including its arguably oldest skyscraper Smith Tower (built in 1914), which today has historical exhibitions in its lobby and an observatory and speakeasy-style bar on the 35th floor; transportation hub King Street Station. (built between 1904 and 1906) – its soaring clock tower provided a standard of time for early Seattleites; and more contemporary landmarks such as the Space Needle., which was built for the 1962 World’s Fair and is currently undergoing a $100 million remodel.

“On a bike tour, you can see a lot of stuff in a short period of time and talk to someone who knows the city,” he says. And, he adds with a knowing grin, “in Pioneer Square, chances are people on the street will start talking to us and sharing their perspectives, too.”

Scheak loves sharing the history of his city with visitors and new residents. “I look forward every season to the surprises that will unfold … and that there are always new variables that I could never imagine happening, happening.” Sort of like Seattle itself.

Walking tours are also a great way to see the sights

Walking is also a great way to see the city. “… you’re moving at a slow pace that allows you to stop and look and observe things that you just can’t otherwise see,” Williams says.

Williams’ latest book Seattle Walks: Discovering History and Nature in the City provides the compelling back story to the city’s historic streets and buildings. He points out Seattle’s early construction continues to impact the city in ways that are especially noticeably to pedestrians. “You’re aware that a sidewalk is tilted because the street is sinking because the building was built on piers or pilings and the street isn’t,” he says.

Walking or pedaling through Pioneer Square, near where the Denny Party arrived and home of the city’s first “downtown,” may be the best way to sense Seattle’s past. Pioneer Square includes a tribute to Chief Seattle, the Suquamish tribal leader for whom the city is named.

The smaller scale of the terracotta and brick Romanesque revival buildings provide a gracious contrast to the soaring heights of downtown’s modern office towers.  Once again, it’s helpful to know the history. “Up until 1911, the earliest buildings had no steel infrastructure,” Williams says. “The big stones are holding up buildings. These substantial buildings also conveyed a message to people in the late 1890s that they were building a city to make it into a bigger place. It gave people encouragement to move here, to invest here.”