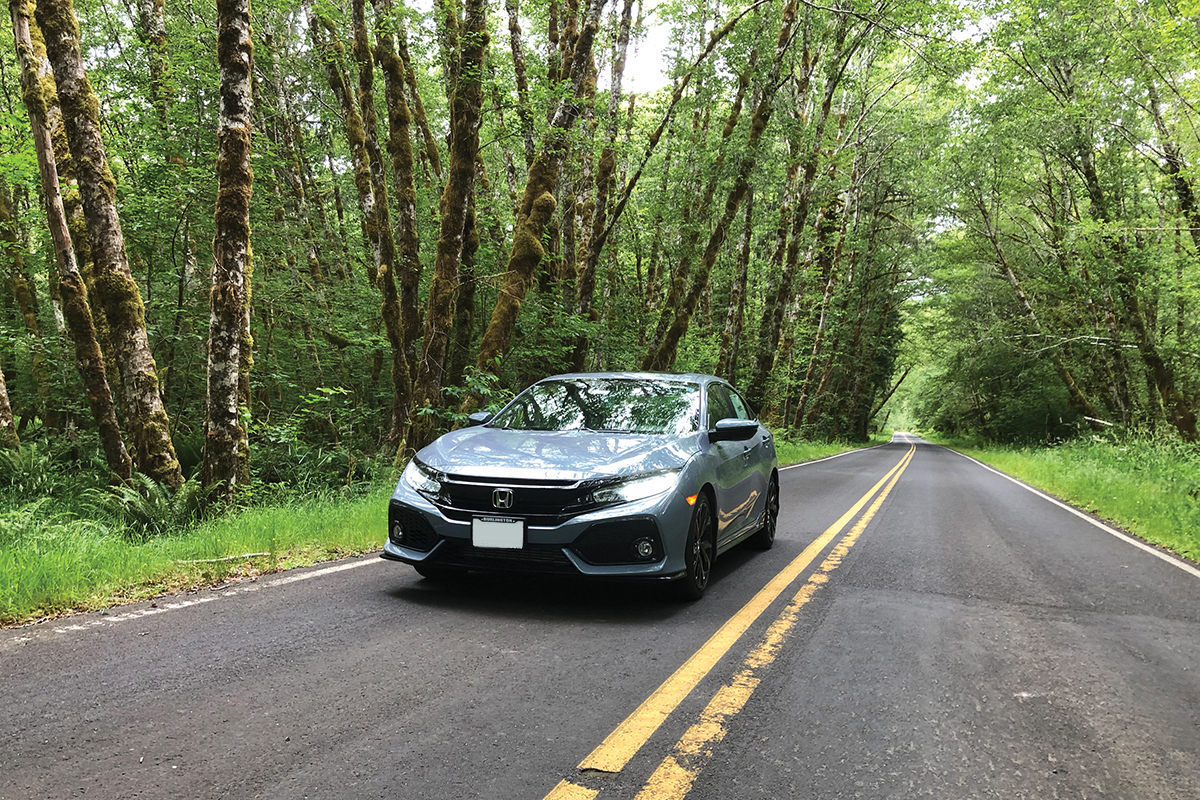 Say someone tosses you the keys to a brand spanking new 2019 Honda Civic Sport Touring Hatchback and says, “What can you do on one tank of gas?” You’d probably say, “You’re kidding, right?” Well that’s precisely what happened to me when the Western Washington Honda Dealers approached me to participate in their “One Tank Trips” Sweepstakes.

My assignment was to drive the car to Seabrook—an idyllic planned community on Washington’s Hidden Coast Scenic Byway—and explore to my heart’s content on one tank of gas. A two-night stay at Seabrook is one of the prizes being offered in their “One Tank Trip” Sweepstakes… and after my experience, I can state with confidence that you definitely want to win this.

At first I thought this place was a little "too" perfect and wondered if I had entered a scene from the Stepford Wives or the Truman Show; then I found it charming, friendly and neighborly; and the next thing you know, I bought a house here!”

I picked up the car from the helpful team at Sims Honda in Burlington at around 9 in the morning and headed south on I-5 to Olympia then west on my 4-hour trek to the ocean. The weather was a little damp and dreary—as were my fading hopes of a bright and sunny couple days on the Pacific Coast. But much to my delight, the closer I got to my destination, the bluer the skies. The route I drove to the “Hidden Coast” at Seabrook took me over a small coastal mountain range and dropped down directly onto the sandy beaches along WA-109 at the community of Pacific Beach—about a mile north of Seabrook.

Day 1: The trip to Seabrook

Upon my arrival, I met up with my hosts, Ivo Andov and Lily Walsh who rolled up and took me on a half-hour bicycle tour during which they explained some of the history and thinking that went into this seaside utopian village. Founded in 2004 by Casey Roloff, Seabrook is a fine example of “New Urbanism.” It is filled with cozy cottages and walkable neighborhoods; many of the homes feature a shared space like a Bocce Ball court or fire pit to promote community and family engagement.

I overheard one of the residents telling a visitor, “At first I thought this place was a little too perfect and wondered if I had entered the Stepford Wives neighborhood or was on the Truman Show; then I found it charming, friendly and neighborly; and the next thing you know, I bought a house here!” I suspect it has that kind of effect on a lot of people.

At city center is a bustling shopping and dining district called Market Street that is abuzz with activity and is experiencing a growth spurt that will continue to expand the list of shops and services for residents and guests to enjoy. Parents sit on spacious front porches while their children, on bikes and pulling wagons, enjoy the freedom that living on these pedestrian friendly streets provides.

I spent most of the rest of the first day exploring Seabrook, sifting sand through my toes and looking for intact seashells along the beach. I had a bowl of great chowder and an IPA at Mill 109 then took another bike ride to get my own sense of this place at a more relaxing pace; stopped; took photos; gabbed with some locals; and crashed my bike on the “Gnome Trail” (thankfully, no injuries to the bike or me.) Brick-oven pizza at Frontager’s Pizza is a must as is a flight of wine and charcuterie board from The Stowaway where I met the delightful Kennedy—a quasi-local gal from nearby Hoquiam—but as it turned out, a world-traveler hoping to coax her twin-brother into a backpacking trip through Germany in the near future.

After the bike ride, beach combing, dinner and a glass of wine, I was more than ready to retire to the amazing cottage they had reserved for me. With a fireplace in the living room, full kitchen and comfy bed (plus a quiet, treelined buffer out my bedroom window), I had no trouble falling asleep to get ready for the next day’s travels.

Day 2: A Day Trip From Seabrook 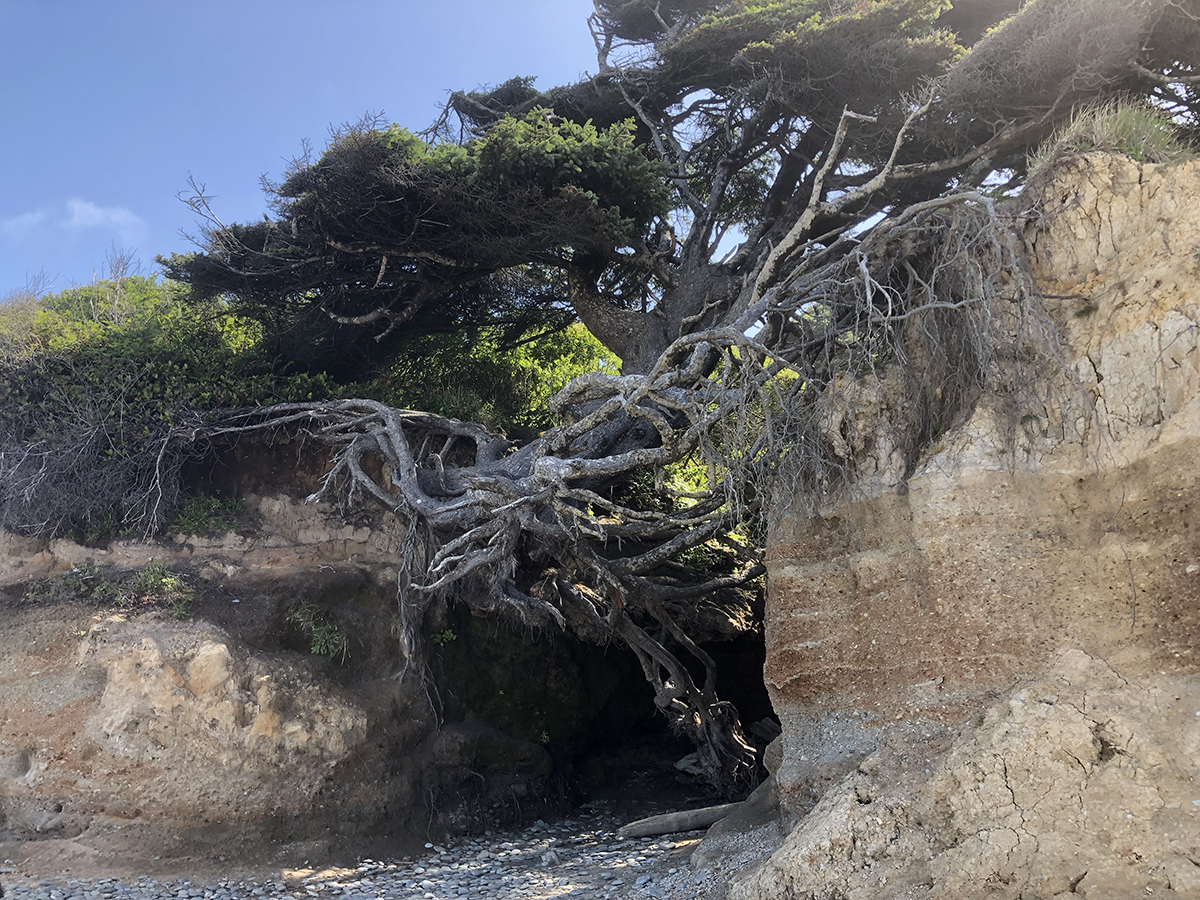 Located on the beach about a half mile north of the Kalaloch Lodge, the "Tree of Life" clings tenaciously to the eroding beach cliffs.

I woke up at around 7 the next morning with an urge to try and find the “Tree of Life” in Kalaloch that I had read about in the local visitor guide. I grabbed a cup of coffee at the Seabrook Mercantile and headed for the Copalis highway that takes you about 20 miles over the coastal mountain range to connect with US-101 where I drove north for another 20 miles to the Kalaloch (pronounced “CLAY-lock”) Lodge. Having passed up breakfast when I left Seabrook, the smell of bacon drew me into the restaurant at the lodge where I enjoyed a hearty meal of eggs, taters and toast… oh, and the aforementioned bacon. Duh.

As a side note, the staff at the lodge were a great reminder of how essential frontline workers are to the tourism industry. These folks were incredibly gracious and willing to share any information they had about the trails and point of interest in the area… including the “Tree of Life,” which as it turned out was only about a half-mile from where I was sitting.

Except for the fact that the sun was rising behind it making a great photo nearly impossible, I was not the least bit disappointed in the Tree of Life. Clinging tenaciously to the cliffside between rapidly eroding banks on either side, it is a truly remarkable and inspiring metaphor for holding on to the brief time we have on this earth. Best time for a photo op would be after noon and into the early evening.

From Kalaloch, I backtracked about 15 miles to the North Shore Loop drive around Lake Quinault. This is a really great route but is not without its challenges. I was oohing and ahhing around every corner for the first few miles. Dense forest, tight curves, the Quinault River my constant companion to the southwest.

A few miles in, I crossed a narrow one-lane bridge and the road turned from a passable pavement strip to a one-lane gravel road; I was fairly certain that I had become distracted by the beauty and missed a turn—but a marker at around mile 11 indicated I was on the right track. This route is pretty tight; a lot of blind curves; but also, plenty of turnouts to let oncoming vehicles pass. It was a little tense at times but overall, a really rewarding experience.

I saw a sign that I was entering Grays Harbor just as the gravel turned back to pavement. From here it was a short drive to historic Lake Quinault Lodge but first, I had to pull over when I saw the sign, “World’s Record Sitka Spruce.” I walked an easy 1/4-mile trail to the tree and had a fellow visitor take my photo in front of it with my arms outspread to indicate its size. Campy? Of course! But equally necessary.

Next stop was the Lake Quinault Lodge—built in 1926 and designed by Robert Reamer (a Seattle architect) in a rustic style reminiscent of his work at the Old Faithful Inn in Yellowstone National Park. FDR visited here in 1937 and announced his support for the Olympic National Park, which was created nine months later.

Outside the lodge is what must be the “World’s Largest Rain Gauge,” that measures rainfall in feet, not inches. So what’s a fella to do? Once again, I posed shamelessly in front of it while some hapless stranger was enlisted to take my photo.

Tahola: Land of the Quinault

Heading back toward the ocean, I decided to turn north to the tiny Quinault fishing village of Taholah. While lacking in overall visitor amenities, I enjoyed a visit to the Tribal Museum where a display of woven cedar baskets and hats is the primary feature. I noticed and appreciated that some of the work was contributed by local students.

According the museum’s staff person, there has been a growing interest among the Tribal community to retain the indigenous culture which had been in decline over the past few decades. Cultural teachings in traditional Quinault weaving, dance, song and language have become part of the education path for the children of the Tribe. So much of a culture is embedded in its native language that the Tribe is proud that one of its own has earned a PhD in linguistics and is now reintroducing the language to Quinault children who may have only heard the language through their elders.

One Tank Challenge... What Challenge?

I headed back to Seabrook and found myself, once again seated on a barstool in the wine bar with my new buddy Kennedy and reflecting on my day—a very long day having logged a bit over 440 miles. But I still had over 60 miles left in the gas tank. So the question, “What can you do on one tank of gas?” was asked and answered.

Averaging over 40 mpg, I was able to cover a heck of a lot of ground in my trusty little Honda Civic Sport Touring Hatchback. Ocean beaches, rain forest, tree of life, fish hatchery, tribal museum and countless scenic Pacific coastline vistas, forest meadows and wildlife sightings… all on less than a tank of gas. The “One Tank Challenge” turned out not to be much of a challenge at all.

Tricked out with adaptive cruise control, lane keep assist, back up and blind spot camera and a ton of luggage space, this car should definitely be on any road tripper’s wish list.

Make sure and bookmark our site for more One Tank Challenge adventures. In upcoming weeks, we’ll be visiting the Willows Lodge in Woodinville; Snug Harbor on San Juan Island and Mike’s Beach Resort on Hood Canal all thanks to the Western Washington Honda Dealers!